No County for Old Knees

Portugal is all hill.

Not like the opening scene of The Sound of Music with gently rising slopes. Nothing like Calgary’s foothills or Montreal’s mountain, or the 14th hole at Westmount Golf Course where we tobogganed as kids

Even in the Algarve where we spent 5 days, walking around the coastal towns of Tavira and Lagos meant an extraordinary amount of climbing. We rented a car to do our climbing for us to the pretty hill town of Monchique and circle down to the south-west tip of Portugal – this is John looking off toward the next landfall: Newfoundland.

In Algarve we also discovered that builders of Portuguese hotels and apartments don’t bother much with elevators. Why would they? What’s 62 steps up when you’ve got a nation of urban climbers?

Lisbon was the real genicular challenge. Even the hills had hills on them. You’re walking along, you look ahead and see that there’s no way but up. So away you go, you can do it, it’s not so bad, just 100 meters to the top. But then the top of the road bends or comes to a T and suddenly there’s another 100 meters up. Repeat. It’s so steep, the slope, that there’s this thing they do around most corners, putting in pie-wedge steps. So people don’t fall off and just keep rolling right to the sea, I think. 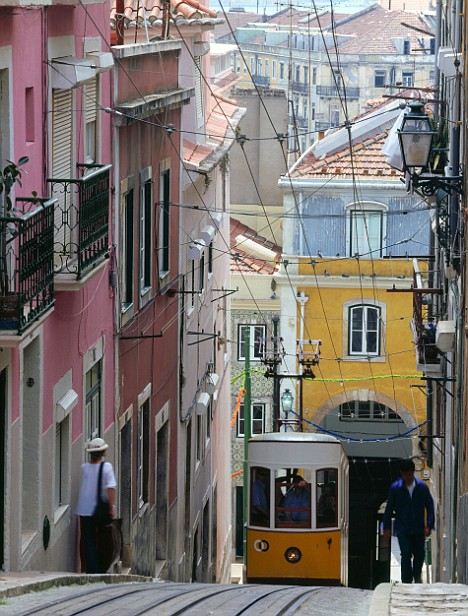 Your best bet is quickly to master enough Portuguese and topography to interpret the transit maps, so that you can find routes that deposit you on top of the hills. The  famous, tiny, rattly, old number 28 tram means a 20+ minute wait to get on and a 20 minute ride crammed in with tourists and the odd pickpocket, but it let us off on an easy 1 km, two-slope walk from home. In a fraction of  that time, the number 37 bus would have dumped us a mere 800 steps from home — but  every one of those steps was up a 45 degree incline. And that’s no exaggeration!

We joked that we hadn’t realized that our time in Spain, with all our gymming and cycling and walking, was nothing more than 2 months of training for our 2 weeks in Portugal. We got used to it, though we did tire of looking at the backs of little old ladies with trim ankles who chugged up the hills, never flagging. On our walkingest day, we did 15,000 steps by John’s phone counter. But his phone did not show that half of them were cranking up hills.

All in all, Portugal is a test of your mettle. Fortunately, the Portuguese have found ways to keep up the strength of the toiling tourist.

We liked Porto best of our 5 stops in Portugal. This is a town that booze made – all the names that appear in lights on the Vila Nova de Gaia hill across the Douro river are long-established English port distributors — Taylor, Fladgate, Sandeman, etc. You’d have to blow up this photo to see all the names. They’re there!

But port isn’t the tipple of choice as it was in the days of, say, Henry Higgins. As in Lisbon, many Porto properties now sit empty and the streetscape can look pretty dilapidated. Yet it retains a gritty charm from its glory days when barrels of port rode the waves to London and the world.

We weren’t in Porto for more than a couple of hours before we deked into one of the many port tasting centres across the river from our groovy riverside flat. At the Quinta do Noval storefront we took counsel from a frighteningly polyglot clerk, selected a set of ports to sample, and settled in as a noisy maritime storm passed. The electricity came and went but we persevered. Turns out we found the most expensive port most to our liking. Funny, that.

The next day we were picked up early for a private day tour up the Douro valley. Our very young guide quizzed us on our paltry knowledge of all things Portuguese as he sped through misty mountains. We finally played possum in the back seat – it was an early start after all – hoping he would take the hint, stop making frequent encouraging eye contact with us in the rear view mirror, and concentrate on the frightening road ahead!

The Douro was lush in the sweet spring air – their rainy season was just ending. The hills were almost mountains, so that the straight lines in each terraced field of grape plantations  are angled differently from the neighbouring field so as to catch the sun. The vines were just beginning to leaf out so that predominant colour was that lovely lime of early spring – a sweet, green patchwork quilt. With the mist only beginning to lift, the light was golden – the sum effect was breath-taking. 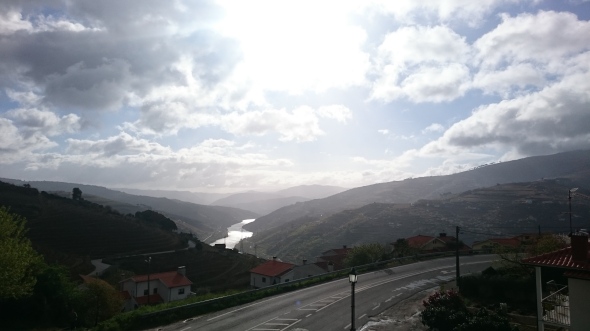 Part of this tour was a visit to a port maker and a boat ride up the Douro to see the vineyards that produce the grapes for the porto. A very pleasant day, all in all.

To make up for our sedentary tour, the next day we did the oddest walking tour we’ve ever been on. Porto’s The Worst Tour Company is a collective of lefty, young, activist architects who eschew the tourist zones in favour of a winding 3-4 hour ramble through the outlying barrios of Porto.

There was no end to the information our guide Guia had on hand to give us about life in modern Portugal. She explained all the empty building we  had been seeing – no law stops owners from letting prime addresses molder as they wait for real estate prices to hit new highs. She explained the weird and wonderful in-fill projects of yore and how these in-fills are being tailored to today’s urban needs. The most interesting was the site of a grafitti artists’ collective – the photos don’t do it justice. 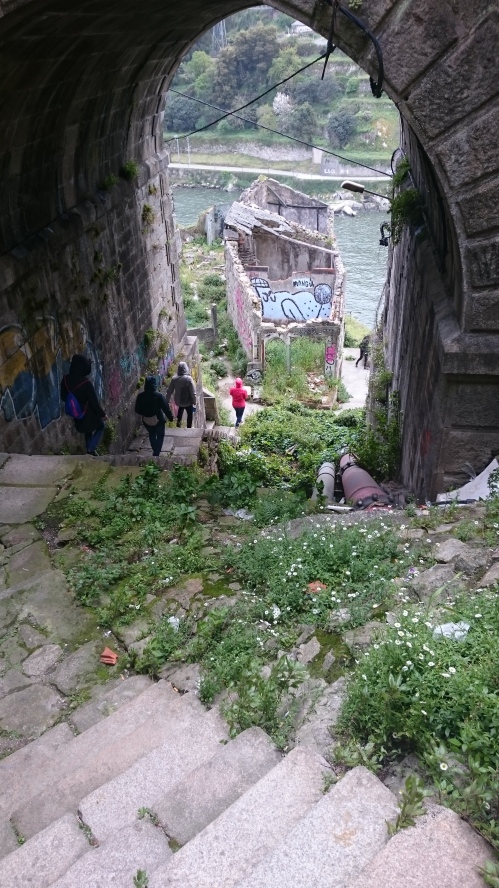 Guia explained education, the voting system, the interplay between Church and state, unemployment … all this while leading through town and then out the other side and down onto a disused railway path. It was a path more suited to goats then a ten-pack of young folks plus two Canadian jubilados, but we were Lisbon-fit by then. We sheltered from a storm under a noisy train bridge until the run-off threatened to sweep us all away – and then at the 3-hour mark J and I abandoned ship and took a train home. Almost 17,000 steps that day, folks. So happy this flat had an actual tub!

Our passage out of Portugal was a bit rough. But that’s a story for another time.

One thought on “No County for Old Knees”