[This one got away from me. I messed up a program on my computer and, for a while, couldn’t upload photos. This goes back to the second week in February.]

We don’t know Seville yet, not as tourists. We haven’t had time.

But JDG got a key paper thumped yesterday. He’s on his way to having a residency permit and can probably relax about staying in Europe past 90 days. Finally, we can see some sites.

After our morning Spanish lesson today and a couple hours spent between administration and terraza-lolling, we headed out to see the ancient Jewish quarter. Apparently it’s very interesting.

We never made it there.

We do know our way to the Sevici bike parking spots in the major squares. However, there were no empty Sevici spaces close to the starting point for the self-guided tour in a city pamphlet. We had to circle around till we found bike station with empty posts. From that place, we tried to do the tour of the Jewish barrio backwards.

Between the terrible instructions and the sadly lacking city map, we got thoroughly but pleasantly lost.

We found the Alcazar all right. Isn’t that a great word? Things should open, or scales fall from eyes, or something should suddenly happen. Alcazar!!!! Dishes be DONE!

Alas, no. Even the Alcazar – royal palace – didn’t open for us. We got there at 5pm, just as it was closing. Remember the Wicked Witch’s castle doors closing in front of Dorothy  et al. when they’re trying to escape? It was like that. BOOM! went the doors. No monkey men, though. Just us and a bunch of other disappointed tourists.

It was after this that we lost our way. When the streets are tiny and street names are only sporadically tiled into the sides of buildings, it’s easy to lose your bearings. Here’s one fellow I found, looking particularly lost, even tho’ there was a big and personal clue right behind him.

So I gathered him up and we wandered.

I have to say. If you’re going to get lost, Seville in February is the place. And not only because it’s Seville orange season!

[ Official side-bar: I know I’ve been mildly raving about my morning orange juice. And we’ve  posted a few photos of orange trees. But all this precious fruit everywhere, it’s hard to take in. We’ve wondered what happens to the oranges – who owns this bounty? If Seville were in Canada, there would be a Seville Oranges Marketing Board; the Royal Canadian Marmalade Police would track down gleaners. But here, the oranges were unaccountably ignored. We knew no one to ask.

Finally, we guiltily reached up a few days ago, and pulled a couple  oranges off a tree. Brought them home and set them on the table – and there they sat. I couldn’t get over feeling that this was squirrel food. They might be wormy. They might put me off my matutinal OJ.

Finally I thought of you, gentle readers – unless  I gathered my courage you would never know  what free-range Seville oranges taste like. So I juiced our illicit pair and now I am ready to bring you up to speed. They’re sour. Between an Sunkist and a lemon. NOT for my morning juicer and not for squirrels.

So, back to wandering the signless streets…]

We chanced upon a small plaza (don’t forget to pronouce that z as a th) dense with orange trees, each thick with fruit. The square is edged with tiled benches and, beyond them, seductive cafes. Impossibly beautiful.

At the end of the plaza we came to a charming museum dedicated to the works of a homet0wn fella, Amalio Garcia del Moral. He painted and repainted (365 times!) the famous Giraldo tower atop the massive cathedral half a kilometer away, but I found his portraits and his people more interesting.

His daughter and another artist also feature at the museum. But, Amalio aside, the museum building itself and its vistas were the show stealers. 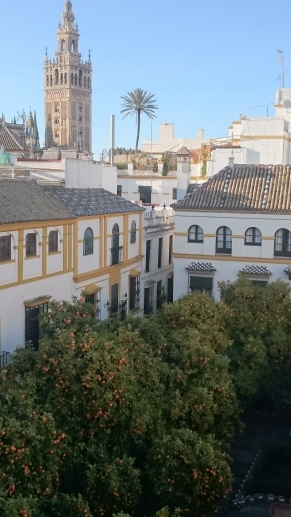 You can see the Giraldo in the background there, and a sample of the tiles that act as wainscotting in many public buildings and restaurants.

After the museum we were waylaid by a ray of sunshine splashing all over a white table cloth. Two vinos blancos later, we made our way to the near corner of the Jewish quarter where stands the Santa Cruz for which the area is named.

Did you notice the other use to which Seville oranges can be put?

By that time, the sun was going down and the streets were getting dark. We worked our way out of the darkening tiny streets past many flamenco cafes and theatres (must investigate), found bikes, and came home to the Alameda where it’s always bright and hopping.

Not an entirely successful day of touring, but a pleasant one.

2 thoughts on “Playing the tourist”